Believe the Hype Jason Murphy is the Real Deal 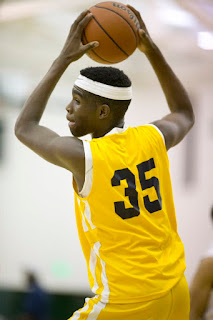 Jason Murphy went into his freshman year rated as one of the Top 50 prospects in the country, Top 10 in the DMV, and was rated as the #2 center in the DMV.  So far Murphy has stayed true to form and done nothing to diminish those honors bestowed upon him.  In fact Murphey who kept the trend alive of top rated DMV Prep players competing on the varsity level from day one; is not only competing but thriving.  He is being considered the top player as freshman in all of Howard Country where he attends Chapelgate Christian Academy.

Whereas detractors devalue the middle school ranking system, the trend continues at a 75%+ clip of players noted in said ranking competing on the varsity level and in the case of Murphy and the Top 10 contributing and making an impact.  If that isn't validation enough then the interest he is drawing from JT3 and Georgetown University should be.

When using the word impact, Murphy is without question Top 3 in the area and is vying for DMV Preps Freshman of the year.  At 6’9 his combination of size, length, and bounce is off the charts. He's got a massive, yet still mobile, frame and can go up to catch lobs. He not only runs the floor well for a guy his size but also has relatively good agility, allowing him to patrol the lane at a wide radius with his shot-blocking ability. He's similarly active on the glass and consequently able to rebound out of his area. Offensively, he's a terrific finisher around the rim and starting to show an instinct for passing.  His physical tools are off the charts and are the basis for his tremendous upside. While he needs to continue to develop his muscle and skill, he's the type of guy who is only just beginning to scratch the surface of his potential.

Murphy is no hype; and if see is believing enjoy the show below: